Chili Piper: Come as you are 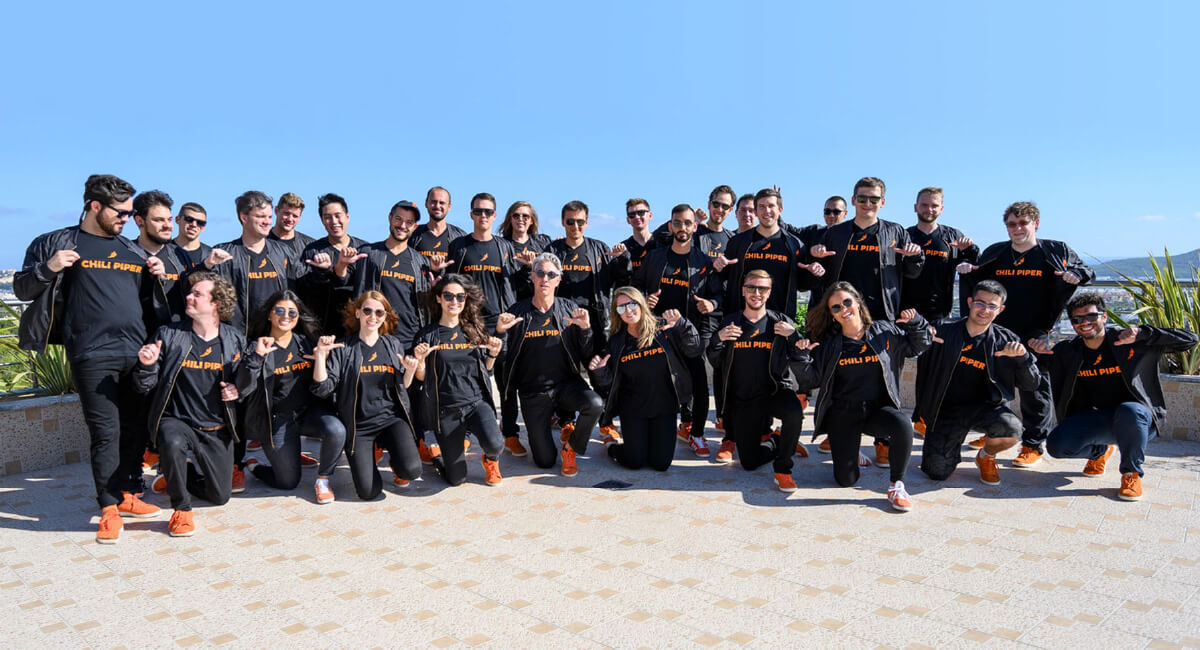 Less than a month into her new role, Tyler and I sat down and discussed what it was like to be the first People Ops hire for a distributed team of 80 people, three months later we reconnected and she shared more about what makes the team at Chili Piper so great (hint: it is not because of their cool Orange swag, though that helps).

“I’ve also learned how to work, not only work, but really thrive in a remote culture. I was forced to work remotely before obviously, like everyone else was, but to intentionally choose remote work and be part of a team of people who have also been that intentional. They just do it really well.”—Tyler, on her first three months at Chili Piper

It is this intentional and deliberate approach to culture, starting before candidates are even hired that earns Chili Piper a spot as a “Well-Distributed” company.

Lately, Chili Piper seems to be adding new people weekly, something that creates excitement when they are introduced to everyone at the company’s All-Hands. Preparation for the new teammates, however, comes before open roles are even posted.

Tyler shares the importance of the collaboration between hiring managers and her team as new roles come up and unlearning some industry standards.

The first thing Tyler says that makes a positive impact on their recruiting is getting the job spec right. She works with hiring managers not just to uncover core responsibilities of the role, but also key traits for success. Tyler explains this is key to opening yourself up to potential new employees, with less bias:

“Take for example, sales, the obvious responsibility, it’s bringing in revenue. But together we dig a bit deeper than that, like, what is the real role of a salesperson? It’s building relationships with customers for the long term, and creating engagement with our product offering. A key trait could be charisma. From there, we assess questions such as: Is this a skill that can be taught? Can they get that skill set from doing something other than coming directly from software sales? Like could they have gotten this from their lemonade stand they made?”

The second big change is to rethink how resumes are perceived.

“Resumes are formatted completely differently, depending on where you are. You have to throw the ‘stylized’ bias out the window and just read the content of the resume.” – Tyler Parson, On creating fair hiring processes

Once the team knows what key skills they are looking for, they truly can hire from anywhere. Chili Piper currently relies on inbounds from interested candidates that learn about their brand and shared content, only sometimes relying on job boards such as weworkremotely.com.

This has been successful, as shown by their engineering team. One that is deliberately distributed across the world, an effort meant to provide incredibly talented people with opportunities where they might not otherwise have.

One challenge many remote companies face is how to both make fast decisions and get everyone involved. Chili Piper’s Decision Memos is their solution. Tyler admits it is a “love hate relationship for some people,” because of how deliberately tactical it is:

“Essentially, what a decision memo is, is a way for a lot of people to collaborate towards a single solution on a single document. It will have the context, the current state, why we think it’s a problem, the end goal. And then there’s just options. And anyone can add an option, or provide feedback. So when people want to geek out on other departments or learn other things, they just go read a few decision memos about what they’re working on.”

Despite the overhead documentation, the benefits shine through: Decision memos are a way to engage with multiple stakeholders, increase transparency, and collaborate around the best possible options asynchronously.

When talking about remote culture done right it is impossible to not use words like ‘deliberate’ and ‘intentional’ words that came up again and again in my interview with Tyler, for good reason!

“The thing with remote work is, it is different from on site work. It is never going to work if you try to force the function and experience of ‘on site’ in a remote environment.” —Tyler, on creating a uniquely remote culture

To this end, Chili Piper welcomes each new hire by getting them set up in their home office: from standing desks, to ergonomic chairs you name it. The CEO also contributes by sharing one of his passions with the team, coffee. As a gift, each new employee gets a Nespresso machine of their choice to “keep them going” as Tyler puts it.

Once on-board, there is a “Come as You Are” mentality written into the company bylaws, which helps teammates feel comfortable in a camera-on environment, helping build trust.

“The rule is, as long as it’s legal, you can look however you want, because if you are forced to look a certain way, we believe that leads to discrimination. Please just have your camera on so we can all see each other. I think that’s very cool. It works. When you invest in people and bring their full selves to work, they’re gonna do better work.” shares Tyler.

This focus on celebrating people and their hard work also comes together in a fun weekly tradition Chili Piper has to reward one person with an “Animal” and a “Unicorn” designation for the week. An Animal representing someone who worked really hard that week and the Unicorn is someone who helped out another team member during the week.

In addition to the winners themselves, all nominees get an email with their manager BCC’d sharing the text of the nomination. The result? More participation.

“I’ll say, hey, just FYI. You got a nomination this week, keep crushing it, great job. By doing that, all of a sudden, I’m getting more nominations every week. People want to spread love and joy so that people who I sent a message to last week are all of a sudden sending me nominations the following week.” —Tyler, on the pay-it-forward mentality of animals and unicorns

From these quirky celebrations, to clear processes for decision making and getting the work done it is clear that Chili Piper is coming in hot as a prime example of remote done well. Every initiative rolled out at the company is done with one clear goal in mind: helping people succeed in doing their best work.

“We believe that the best ideas come from everywhere and come from diverse perspectives. Different types of people working together towards a common goal.” —Tyler, on the importance of remote work

Want to join Chili Piper? Good news is they are hiring, and to be successful in remote working Tyler recommends you focus on two things:

To learn more about Chili Piper, check out: https://www.chilipiper.com/

What it takes to build distributed communities with Lars Schmidt

Building strong communities is more important than ever.
People Heroes

Aligning an organization in hypergrowth mode with Dipti Salopek

Tips for mastering the art of alignment.
People Heroes